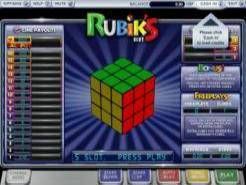 Play Now
Playtech are well known for having the biggest and the best selection when it comes to old school arcade type games. This fantastic new release Rubik's Riches is arguably the best of them all. It's not hard to guess what it's based on...that famous cube that got all of us puzzled back in the 70's and 80's. And by all of us we mean over 350 million of us, as that's the amount that were sold. You simply saw this thing everywhere as people of all ages attempted to solve it. The cube was a star, constantly on TV, in magazines and newspapers and flew off the shelves at an alarming rate. Well that was then and this is now, and although some people are still trying to solve the riddle times have moved on. Playtech has turned the Rubik's Cube into an online arcade game that everyone can play. It's a fun game to play and when you have placed your bet you will see three faces of the cube all of which have a mix of colors. There are three ways in which you can win by playing this game, and it works a little like an online slot. The first way is to line up three squares of the same color, either horizontally or vertically and this will count as one winning line. Should you see a face of the cube all the same color then that would count as six winning lines, three vertical and three horizontal, which means that if you see three faces all of the same color then that would give you a total of 18 wins. If the face has all the same colored squares then on top of the six winning lines, you will also receive a face payout as a bonus. There is a side game too in which during the game letters of the word Rubik's will light up, and should you light up all the letters you have triggered the bonus game. The player simply picks one of the 27 squares and wins either free spins or a random payout and you can keep picking until you see the word start and the game goes back to normal play. There is a pay table on the left of the screen showing you exactly how much you would win for each wager and Rubik's Riches is a whole lot of fun to play. It's a simple game and offers something for everyone.
Play Now