Stash of the Titans Slots 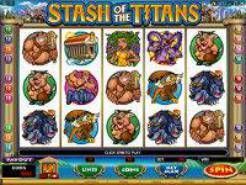 A Quick Lesson in Greek mythology

With the help of Medusa, Cerebus is the triple headed dog, Pegasus is the flying horse, the Griffin which is the half lion and half eagle, and Kraken you will unveil many different winning opportunities. The Stash of the Titans symbol is wild and is also the Multiplier so it can be swapped for all other symbols except the Scatter. The Scatter symbol is Medusa. The Multiplier symbol, Stash of the Titans, can really increase the amount that you can win depending on how many you get. The symbols are actually amazing and there is also an educational value to this game too. Don't worry...Medusa can not turn you to stone in this game but she can fatten your pocketbook.

There are Lots of Free Spins on Tap

When Medusa shows up on the reels at least three times at once you will trigger the free spins round. Here, you win 15 free spins and all of your prizes are not doubled...not tripled...but times by four! There is a new feature in this game with a bit of a twist...the Mixed Pay Feature. Basically, this is a semi-wild symbol feature used for certain symbols and they use their own separate pay table...in a sense these symbols follow their own set of rules!

Use the Autoplay feature in Stash of the Titans for your convenience. Autoplay lets the machine spin itself after you set up the values of how you want it to spin! Divulge into a world of ancient Greek mythology where characters and winning jackpots come to life like you have never known before! Stash of the Titans is the game that should be played now...you can't afford to waste another minute!

Stash of the Titans Slots News

Where to Play Stash of the Titans Slots

Stash of the Titans Slots Info