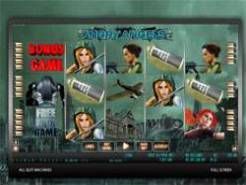 Play Now
The World Match avalanche of online slots continues with yet another release and this one is called Angry Angels. It's a solid 5 reel 3D affair with some decent graphics and as with all World Match slots it has that fast play action which players seem to enjoy. It has a Victorian theme to it and a great soundtrack and it is pretty involving. The bonus game on Angry Angles is pretty cool and it sees the player jump on board a rocket launcher and has to pick one from three targets that appear on the radar screen. The player must shoot the rocket at the target and when it hits...kaboom, the amount won is revealed...it's a little different and some players will enjoy it. There's also a freespin round that helps boost those winnings and as with all World Match slots there's the interactive function bar which allows the player to choose the setting that they prefer that include the options of auto-play, fast play and spin stop. World Match tend to make a dig deal of the fact that you can share your game experiences on all major social networks such as Facebook, Twitter and Google + and this feature is available on every game that they offer. Overall all Angry Angels is a pretty good slot and it has the features that are the mainstay of all WM slots and they seem to have a format that they tend to stick to. Players seem to like it and they do indeed keep rolling them out...rapidly.

Where to Play Angry Angels Slots