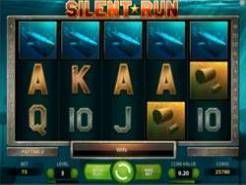 Play Now
Silent Run is the all new online slot from games development company Net Entertainment. You may not automatically associate the name with the theme however. Silent run is based on the submarines that roamed the Pacific Ocean during World War II. These monsters of the deep hunted down enemy ships and quite literally blew them out of the water! The term silent run and why this is the name of the slot, refers to the stealth mode in naval submarines and whilst in this mode they go undetected by sonar and therefore the enemy as they silently make their way through the depths. This awesome five reel slot takes you to those days and has brilliant 'echo' style sound effects as you play along. Silent Run is yet to be released but from what we can see it's going to be a huge success. The bonus feature alone makes it so worth playing as you experience the amazing feeling of shooting your torpedoes and blasting the enemy to pieces. As you fire away you'll be searching for the elusive Premium Ship which throws out some huge prizes. There is also a great wild symbol called the echo wild which sends out a sonar signal searching for other wilds to come and join it, making even more wins. This is one outstanding online slot and on release will take you back to those great arcade games we all once played as you stared down the periscope looking for ships, the big difference here is that the graphics and animations are so much better and you get the chance to win some big cash prizes. Silent Run is due for release soon and we know it's going to be a winner.

Where to Play Silent Run Slots