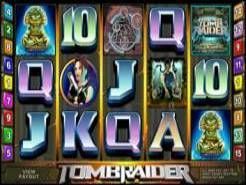 Play Now
The Tomb Raider game is based on the popular video game and movie series of the same name. This game has 5 reels and 15 paylines, offering plenty of slot game excitement. The wild symbol is represented by Tomb Raider, and the scatter symbol stars none other than the inimitable Lara Croft. Included in the other symbols are golden idols, tomb maps, Aces, Kings, Queens, Jacks and many more "chilling" icons. The wild symbol substitutes for all symbols except scatter and bonus idol. There are also bonus features and multipliers at every turn to dig up that hidden booty. Download and Play Tomb Raider Slots now!

In Tomb Raider, coin denominations range from one cent to one dollar, and the player can bet 5 coins on each of the 15 paylines featured on the slot, making the potential maximum win an incredible, heart racing, $75,000. When 2 Lara Croft scatter symbols appear, the win is doubled. Three scatters will quadruple the win (and activate 10 free spins with triple payouts), four Laras will multiply winnings by 50, and when the intrepid lady hero makes her appearance 5 times anywhere on the reels, the win will be multiplied by a whopping 400! How sweet is this candy! With all these chances, it’s simply a case of “win, win”. Powered by Microgaming , Tomb Raider is easily one of the most popular on-line video slots, providing lots of below ground action and multi bonus packs. Much can be won with the bonus game, aptly named "Tomb", activated only when three or more of the “idol” symbols show on the reels. Once hit, another screen is opened to reveal these idols in different places and you simply follow the instructions, choosing idol symbols to reveal the hidden jackpots behind them. The bonus game prizes are between $36 and $2500.

With striking images, such as tomb rooms, tigers, and logos, the graphics, downplayed with muted tones and accompanying sound effects, are eerily realistic. Tomb Raider is enriched by a bonus games and a free spin feature, and although it is a dollar slot game, a scoop can be made with a minimum outlay of just one cent.

Where to Play Tomb Raider Slots

Tomb Raider can be played at: Betway Casino , and Hippodrome Casino where many bonuses and special offers are available to the players.

Where to Play Tomb Raider Slots