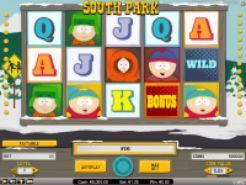 Play Now
Outstanding software development company Net Entertainment producers of some of the finest online slots such as Scarface and Frankenstein are to release a humorous new slot based on the popular TV show South Park. The slot was in fact promised quite some time ago and unveiled way back in February however the release was delayed and now a new date has been announced. At the time of the unveiling of the slot to the industry Per Erikson at Net Entertainment stated that, “South Park is our biggest game yet and we are tremendously excited about its potential”, the reasons for the delay have not been given, but the great news for slots fans and fans of the cult TV show is that at least it's on its way. There are a few videos floating around and from what we can see it will indeed live up to expectations with some great quirky graphics and of course the TV theme tune. There are a number of Net Ent exclusive features such as mini games as well as trade mark freespins and other features. South Park is a 5 reel 30 payline game with wild substitutions, sticky wilds and arguably the best thing about this slot are the 3 different mini features on offer. All of the popular characters from the TV show make an appearance such as Catman and Kenny and are all involved in their very own games as Kenny collects coins and Catman hunts down hippies and collects prizes. It all looks set to be a fantastic online slot and will be welcomed with open arms by fans of the show...after much hype, it looks like the wait is finally coming to an end.
Play Now