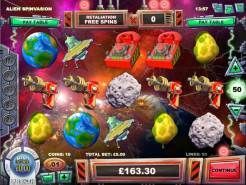 Play Now
It has just been announced that Rival Gaming has released a brand new slot entitled Alien Spinvasion . This is a 5-reel, 50-payline slot that can be played via download, instant play, and on your mobile devices. The slot includes such features as Sticky Wilds, The Robin Hood Free Spins Round, and dropped symbols during the free spins round.

What is Alien Spinvasion Slots About?

It seems that an Army General has his finger on the “button,” in an effort to annihilate the Alien Spacecraft. Symbols include an Alien Egg that’s about ready to hatch, a Deadly Ray Gun, a Meteor in a collision course, a Rocket, and Earth. Other symbols include cards from ace through nine. The Alien symbol is a Sticky Wild. The Army General will activate the free spins round. The entire slot game’s reels to not spin but drop down and are replaced with new symbols. This game sounds very exciting, and we look forward to playing it as well as reviewing it for our online players from the US. Stay tuned!
Play Now