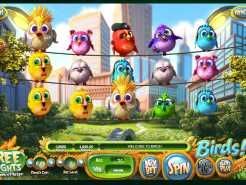 Play Now
The first image I had of this new slot game was a take off on the Hitchcock movie. But was I wrong! This is an avian theme-based slot that is described as having a “revolutionary style of reels that are visually striking.” A 5-reel, 25-payline 3D video slot, Birds! incorporates 11 birds, each of whom are distinct from each other, but who are considered the “stars” of the show. Among the features included in the Birds! are: a Free Flights feature offering unlimited free spins; cascading reels; a meter that will garner additional free spins when filled; a double-up bonus; and more. This game is part of Betsoft ’s Slots 3D series, and will be exhibited at the at G2EAsia 2016 Show in Macau on May 17. Look for our full review of this new and exciting game from Betsoft.
Play Now