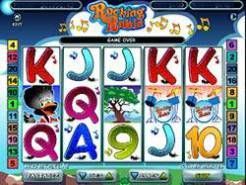 Play Now
The Arrow’s Edge 5 reel online video slot of Rockin Robin is a 1950’s rock n roll themed slots, with a super cool Robin as the central character. Know we know what you’re thinking...that it could be a slot based on the great Jackson Five song of the same name, but it’s not, and it’s more Chuck Berry than Michael Jackson and the gang, with a rockin 50’s theme and plenty of superbly designed symbols depicting it. Rockin Robin is a bright and lively slot and all icons are unique to this Arrow’s Edge creation and there's a whole load of great symbols as they’ve skipped using high value playing cards and designed every single symbol especially for the game. With features galore and a great rock n roll soundtrack, Rockin Robin is a must spin slot for fans of this golden age of music.

The symbols are so well designed and really bring the slot to life, and as well as the great Robin himself you’ll see the yellow bird who must be his girlfriend, two members of the band, the drums, guitar, the microphone, the saxophone, a worm wearing headphones, berries, and the birdhouse, with the special scatter symbol being the tree, no doubt where the band lives! The highest paying symbol is the Rockin Robin and that will pay a massive 5,000 coins when all 5 are seen on the reels. It’s the tree that will act as the scatter symbol and pay out when only 2 are seen, however 3 Tree scatter symbols and the freespins round will be triggered. You can be rewarded with up to 15 freespins, depending on how many scatter symbols you see on the reels, and during the freespins round all wins are doubled and the spins may also be re-triggered too, making it a very good bonus round. The Rockin Robin himself is the wild symbol and will substitute for all others except for the tree scatter symbol, and he’ll also pay a win when only 2 are seen on the reels.

Rockin Robin is a well designed and simple 5 reel slot to enjoy. It serves up enough features to keep you more than interested, however it’s the theme and the great soundtrack that players of this slot will like the most. Rockin Robin will have you tapping your feet along and keep you more than entertained, and with a wide betting range it’s a rock n roll slot that all players can check out.