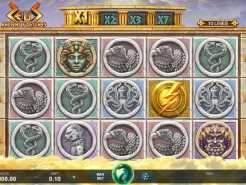 Play Now
Zeus was the king of the gods in Greek mythology. He is the top guy and in this fabulously designed game, he is also the top god bringing players the best results and allowing them to play this game endlessly. Produced by Microgaming, Zeus Ancient Fortune slots is a perfect tribute to the knowledge of this experienced software developer for the gaming industry. Players can enjoy Zeus Ancient Fortunes slots online and at mobile casinos with music playing in the background that really gives the player a feeling of being part of the ancient world. The setting for the game is a clouded paradise where metal effigies of the different gods appear on the reels including Zeus, Hermes, Dionysus, Poseidon and Kraken with as snake and panther keeping them company.

Basics of the Game

Zeus Ancient Fortunes is a five-reel video slots game that has ten paylines. Players can try out the game in fun mode before placing real money bets whether they have downloading the game or are enjoying it through the instant play option or have chosen to play at a mobile casino using either Android or Apple devices. Players can enjoy the fun mode for as long as they want and when ready to place real money bets, the player has a choice of placing up to $70 in real money bets using coin sizes that range from $0.01 up to $7. There is an auto play for players that like to preset the number of spins the game runs for and at any time players can change the auto play and carry on manually hitting the spin button.

Rolling Reels and Other Special Rewards

The rolling reels feature in this game means that consecutive wins for the player result in an increased multiplier. Winning payouts are rewarded when the player lands three or more of the symbols on the screen in either direction, this is a both ways pays game. The rolling reels bonus gives players up to 7x the coin bet placed in the base game and when playing free spins players can win up to 21x the winnings for consecutive wins. The wild is Zeus and he can substitute for any of the other symbols on the screen awarding the player with an extra win.