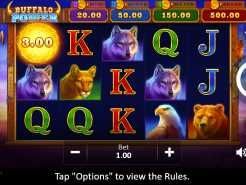 Play Now
How do you fancy getting to grips with some Buffalo Power? This Hold and Win slot game does use some animal magnetism to draw you in, but what else might be in store for you? We’ve explored every inch of the game for you, so you can see if this holds enough promise to spin the reels for real.

This is a slot created by Playson. You may not be too familiar with the name, but you’ll surely have spotted some of their other games at certain casinos. They have other titles based around the Hold and Win idea too.

Check out the demo to get a feel for the game

This looks superb, working along the same lines as the real version. You may not net any proper prizes, but you’ll certainly figure out if this is the game for you.

The theme used in Buffalo Power Hold and Win slots

Buffalo do indeed appear here, but the presence of other animals mean this is an animal-themed slot. You’ll also see a mountainous backdrop, highlighting the stunning area in which these animals live.

You may find, as we did, that you stare into the distance of that background for a while before you play. The reels themselves, along with the icons appearing on them, are detailed and add to the depth of the game. We cannot find fault with this aspect of Buffalo Power Hold and Win, for sure.

There are five reels clearly displayed on the screen, each showing three spaces for icons to appear. This is a jackpot game, with four jackpot amounts shown above the reels. The buffalo is a stacked wild, but it can also appear with a x2 multiplier displayed on it. This is a stacked multiplier wild, and it behaves just as you would expect it to. The basic wild only appears in the base game and the multiplier version is restricted to the free spins. It substitutes for every normal symbol. The scattered mountain is the first of three symbols the wild won’t replace. A flaming orange ball (the sun, maybe?) is the bonus icon, while the Power Symbol is shown in the same color with a buffalo on it and the word POWER.

How many paylines does the game have?

There are 20 fixed paylines in this game.

How much can you wager on the game?

Since we have fixed paylines in play here, we merely need to choose a bet for each spin. The smallest of these is 20 cents while the largest is $100, with many options between those limits too.

An informative paytable is included

This looks superb and is designed to explain everything in easy fashion. We recommend you check it out before you play.

Exploring the bonus round

Remember the Bonus and Power symbols we described earlier? You need a combination of any six of these two symbols to unlock the bonus round. The triggering symbols stick in their respective positions and you receive three free respins of everything else. The idea is to find more Bonus and/or Power symbols during the respins. Whenever one or more are found, you get your respins reset to the original three. If you manage to fill all 15 positions with Bonus and/or Power symbols, your total prize is doubled. Each Bonus symbol carries a prize value. These are added together and awarded at the end of the bonus round. The Power symbols are the ones that can lead to one of those four jackpots. You would need two, three, four, or five of them to trigger the Mini, Minor, Major, or Grand jackpot, respectively.

Free spins can be won too

The trick is to find three scattered mountains to earn eight free spins. The stacked wild carries a 2x multiplier whenever it appears in this round.

Do we know what the RTP is?

No information appears on the Playson website or in the paytable, so no, it doesn’t appear the details have been released yet.

Our rating for Buffalo Power Hold and Win

This is a superb slot with plenty of potential. Of course, the jackpots are hard to get hold of, but you would expect that. You do have some free games to find too though. Overall, the game certainly deserves 8/10.

Are we going to hear about any jackpot winners?

We may do once the game gets underway. It is important to note that the prizes shown in the paytable – and those shown for the four jackpot amounts – vary depending on the amount you wager on each spin.

Play the demo of Buffalo Power Hold and Win today

The demo is a good place to begin, giving you a chance to figure out how the game pans out and whether you like it. Don’t risk your gaming budget until you know for sure what you think of this one.

Plenty of players are likely to play for real

If you reach the bonus round, you could still pick up some cool prizes even if you don’t manage to scoop one of those jackpots. This game certainly has bags of appeal.

You can opt to play on your mobile device as well

Whether you use Android or iOS, a tablet or a smartphone, the touchscreen controls for this game are easy enough to use. Start with the demo to be sure you’ve got the hang of it.
Play Now

Where to Play Buffalo Power: Hold and Win Slots