Quest for the Minotaur Slots 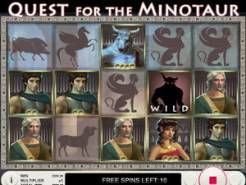 Play Now
One of the unique features of Quest for the Minotaur slots are the Silhouette symbols. Once again, we are in new territory when it comes to theme-based slots. I particularly like the Quest slot game because it is different and definitely out of the norm. There are special features, and the slots appear opaque, meaning that you can see through to the background of the Greek temple.

Quest for the Minotaur is a 5-reel, 20-payline slot with a jackpot worth 5000 coins. The max bet is $100 per spin; however, there are lower coin values you can utilize as long as you play all lines. There is an Auto Play button as well as the bet and line buttons. The 3-page pay table is available to you when you click on the small ‘I’ located at the bottom left hand corner of the slot.

There are four central characters in this game: the Minotaur, Lady Ariadna, Theseus, and the King Minos of Crete. The other symbols are all shadow symbols. The Wild is the highest paying symbol worth 5000 coins if you get all five. The four characters will pay out 1000 coins, 500 coins, 400 coins, and 300 coins, respectively. The two other special symbols are the Bonus Chest symbol, and the Scatter Clew symbol. What is a Clew? According to Merriam Webster, “the "ball of thread" meaning of clew (from Middle English clewe and ultimately from Old English cliewen) has been with us since before the 12th century. In Greek mythology, Ariadne gave a ball of thread to Theseus so that he could use it to find his way out of her father's labyrinth.”

When you get three or more Bonus Chest symbols on an active pay line, you will win up to 2300 bonus points in the Labyrinth Escape Bonus Round.

In all there are 5 shadow symbols (not including the Wild symbol). All wins are multiplied by your total bet.

With a $20 bet, I won $80 by getting 3 wilds along with Lady Ariadna. The next spin garnered me $235, and my final win was $420. The wild symbols show up a lot in this game. But the bonus and free spin rounds are elusive. I do recommend you play Quest for the Minotaur as I do believe the bonus round and free spins round will yield greater results.
Play Now

Where to Play Quest for the Minotaur Slots

Quest for the Minotaur Slots Info