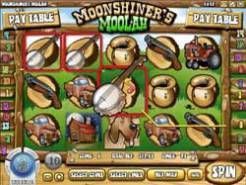 Play Now
A brand new video slot has been launched by Rival software. It’s called Moonshiner’s Moolah Slots. It is filled with some pretty amazing characters, and offers a wide range of bonus features. Moreover, it is so much fun to play given the simplicity of its animated symbols. Let’s take a closer look.

A 5-reel, 20-payline bonus video slot, Moonshiner’s Moolah Slots allows you to wager from 1¢ to 25¢ per line for a total max bet of $50 per spin. It features some pretty wild bonus games that are interactive and challenging. Moreover, you could win up to $4500 during regular play and up to $15,000 during the free spins round. Now that’s a slot worth investigating, right?

The cast of characters in Moonshiner’s Moolah Slots include Grandpa, Grandma, a Bloodhound, Jug, Truck, Tractor, Shotgun, Spittoon, a Blonde Woman (who looks like Daisy from Beverly Hillbillies), and who is also the expanding wild in this game. She will appear on reel 1. As an animated slot game, listen for the shotgun to go off when appearing in a winning combo and even the sounds you’d expect from someone who spits in a spittoon! Feel free to lower the volume at any time.

The first bonus feature is called the Bottle Bonus Round. When three or more Grandpa symbols appear, the bonus round will be activated. Here you will be shown 12 brown jugs. You will be directed to select three of them, after which your prize amount will be shown when each bottle opens and the total of all three is your reward.

The Chicken Shoot Bonus Round

The second Bonus Feature is called the Chicken Shoot Bonus Round. Here you will have to shoot six chickens. You will only be given six shells and a shot gun, so watch your aim. Once you have spent the six shells, the game ends and you are awarded a prize total.

For its interactive play, fabulous payouts, and all around good fun, we invite you to play Moonshiner’s Moolah Slots at our featured casinos.

Where to Play Moonshiner's Moolah Slots