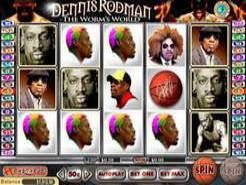 Play Now
MX Digital, a game developer owned by BHE TV, announced a partnership with Dennis Rodman. They are working together on a line of online casino games that feature the superstar. Dennis Rodman's frequent travels to Europe led to his interest in online casinos. After appearing as a spokesperson for GoldenPalace , the company saw more than $1 million in bets. With the interest he is gaining, it's not surprising that he'd partner with MX Digital to create his own casino games. Hopes are high for continued growth for casinos and games that feature Mr. Rodman. Dennis Rodman started filming scenes for some of the video slot games. The goal is to make Mr. Rodman an integral part of each game. His appearance and personality will shine in each one and draw players in as a result. Look for Dennis Rodman's games starting in mid-2013 in both online and mobile casinos offering MX Digital games.

Dennis Rodman is in the NBA's Hall of Fame. He retired in 2000 after playing for the Chicago Bulls, Dallas Mavericks, Detroit Pistons, L.A. Lakers, and San Antonio Spurs. He's also worked as a professional wrestler and been on a few reality TV shows, such as “Celebrity Mole, the UK's “Celebrity Big Brother, and “All-Star Celebrity Appearance.”

Since 2008, MX Digital has been an innovative creator of interactive casino games. Among their line of video slot machines are Taxi Frenzy slots, Montecarlo Millions slots, and Candy Town slots.
Play Now