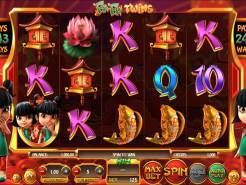 Play Now
In keeping with their popular Slots3 series, Betsoft has just released a brand new slot game entitled FA FA TWINS . This is part of their 3D video slot collection which, if you have played them, is considered the best online. FA FA TWINS has a Pan-Asian theme, and is beautifully designed to provide you with the best in 3D gaming. You may have recently played some of the newer Betsoft 3D slots including Kawaii Kitty , Great 88, Charms & Clovers, Birds, and more.

FA FA Twins is a 5-reel, 243-payline 3D slot. Betsoft states that this slot game has the “dual reel” mechanism. This means that at the beginning of each spin, at least two adjacent reels will be the same, that is, have matching symbols. This special feature can spread from 2 reels to 3, 4, or 5 reels rendering extraordinary payouts.

FA FA TWINS will also have a double-up feature. This will allow players to gamble half or all their winnings in an effort to double them. The most you can win playing FA FA TWINS is 1,215,000 coins in a single spin. Moreover, the slot game’s Logo is the wild symbol and will substitute for all over symbols. The wild will show up on reels 2, 3, 4 and 5. We invite you to play the new and exciting FA FA TWINS Slots at our recommended casinos .
Play Now