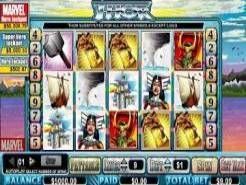 Play Now
This could be the start of something very big at InterCasino as they launch the next of their new games from the outstanding Betsoft slots portfolio. Recently we’ve seen the addition of After Night Falls , At the Copa , Mr Vegas, Tycoons , Safari Sam and Boomanji , however they have all appeared on a weekly rollout, but this week InterCasino have thrown caution to the wind and decided to boost their Betsoft offering with another 3 massive titles. InterCasino are calling it their Super Charged Game Day and with the launch of The True Sheriff , Rock Star and Three Wishes maybe super charged is an understatement. Rock Star sees you join a hard working touring rock n roll band, and as they tour the globe selling records by the millions you get to jump on stage and rock out your very own guitar solo, earning plenty of cash as you do. As the True Sheriff your job is to clean up a town out West that’s having more than it’s fair share of problems. You’ll need to draw your gun now and again to keep the peace, but that can score you plenty of big wins...it’s a dirty job, but someone’s gotta do it. Three Wishes on the other hand is a lot more serene and this genie and Aladdin themed slot offers up fantastic graphics as you whizz around on your magic carpet. InterCasino are offering a staggering 100% welcome bonus at the moment, one that can reward you with up to €500 free, and that is a fantastic amount of free cash to hit these new Betsoft slots with!
Play Now