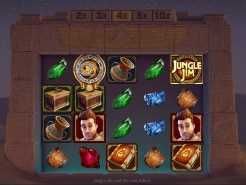 Play Now
Once again, although US players do not have access to this game, we are nonetheless providing our non-US players with highlights of the New Jungle Jim and the Lost Sphinx Slots directly from the provider.

Fans of Jungle Jim will be happy to learn that he is back from El Dorado and has headed to Egypt. Jungle Jim and the Lost Sphinx is the second installment in the Jungle Jim slot series. The game is packed with features that increase the thrill of playing it to levels that equal a real trip across the mysterious sands of Egypt.

Who is the software provider for this Slot Game?

How Many Reels and Paylines does this Game Have?

Is this Game available to Mobile Players?

Can I Play this Game for Fun and for Real Money?

Yes. Join any one of our recommended non-US casinos and you can certainly play for real money and see on the site itself if they offer Instant Play.

What are the Special Features Playing Jungle Jim Slots?

At certain points in the game, the slot changes to a 5x5 reel, 50-payline slot. It also has the Rolling Reels feature as well as the Win Booster and a Multiplier Trail that will increase during the free spins round. The base game opens to a 5x4 reel slot and a multiplier trail of up to 10xs a player’s bet. Each successive win sees Rolling Reels blast away winning symbols as new symbols land on the reels.

How Does One Unlock the Additional Reels?

When three scatter symbols hit the reels, players are invited to join Jim as he descends into a five-by-five reel, 50 payline Chamber of the Lost Sphinx.

Players are awarded 12 free spins, while the multiplier trail rises to up to 20xs. During the free spins feature, Golden Sphinx symbols landing on the center reel will help players to get to the 20xs multiplier. Each Sphinx symbol collected gives an additional free spin and upgrades the multiplier trail to a higher level. Players can increase the frequency of the free spins feature by triggering Win Booster, during which they only need two scatter symbols to access free spins.

Where to Play Jungle Jim and the Lost Sphinx Slots