Batman and the Batgirl Bonanza Slots 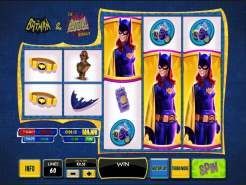 Play Now
We’re back with another Batman slot game, only this time he is with Batgirl. Needless to say, there will be more Batman Slot games to come if Playtech has anything to say about it. With the help of DC Comics producing these comics, movies, and TV series; let’s just say the game is on. You’re probably asking why we are reviewing all of the Playtech DC Comics slots. The reason is because many casinos have added all of Playtech’s games in this genre.

This is an interesting slot game in that the pay lines go from 2o to 40 to 60. Batman and The Batgirl Bonanza is a 5-reel, 60-payline slot, but the configuration of the slot itself is quite unique. The coin sizes range from .30 cents to $30, with a max bet of $30 per spin. Another unique feature that is exclusive to Partech and the super hero slots is that there are four jackpots: Grand, Major, Minor, and Mini. The slot game has an Auto Play as well as the Turbo mode for faster spins. We recommend you read the 8-page pay table so that you will understand the full scope of this slot game.

The symbols in Batman and the Batgirl Bonanza include: the Bat, which is the wild symbol and substitutes for all other symbols to form winning combinations. It does not substitute for the scatter symbol. Get all five Bat symbols to win 2000 coins. Other symbols in the high paying arena are Batman, Batgirl, and Robin. There are also Bat-Gang Co-Op Symbols. These symbols can stand for either character to create huge wins. The lower paying symbols are multiplied by the line bet and include: the belt, statue and radio symbols, motorbike, and Commission Gordon.

When you get the Bonus symbol on columns 3, 4, and 5, it will activate this feature. Match super heroes at the beginning of this feature to win up to 25 free spins. During this free spins round, the first two reels will merge to form one filled reel with 2x2 symbols.

If you enjoy any of the Batman movies, and who doesn’t, we invite you to play Batman and the Bat Girl Bonanza Slots at our featured casinos.
Play Now

Where to Play Batman and the Batgirl Bonanza Slots