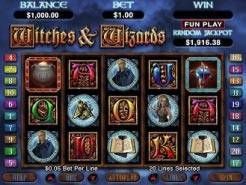 Play Now
I have been reviewing slot games for several years now and it takes a lot to impress me. When I first played Witches and Wizards Slots , my initial reaction was that the graphics were quite stunning but I was unimpressed by the fact there were only five main symbols with the rest being cards. After playing for an hour with no tangible results, suddenly I found myself winning the free spins round. It was pure magic!

Witches and Wizards is a 5-reel, 25-payline random progressive jackpot slot with a max bet of $125. You can use the smaller coin sizes beginning with 25 cents, but if you want to reel in the best payouts, betting the max is recommended. It is also advisable to read the pay table as it contains very important information you will need to successfully play this game to the fullest.

As I said at the beginning of this review, the card symbols seem to overshadow the five main symbols which are: the beautiful witch, the handsome wizard, a cauldron, a wand, a book of spells, and skulls & bones. While the theme of this slot is about witches and wizards, they have little to do with getting high payouts. The two symbols that do are the cauldron (encased in red) and the wand (encased in blue). The cauldron symbol appears on all reels and substitutes for all symbols except the scatter symbol, the wand. Get two wand symbols anywhere on the reels, and you win 250 coins. But if you get three or more wand symbols, then you will witness something you’ve never seen before in a slot game.

The Magical Free Spins Round

When three wand symbols appear, you will win 10 free spins. Now hold onto your seat! With each spin of the reel one of two things happen: The witches hand appears and sprinkles dust over the random reels converting them into wilds. This is called the Wild-Explosion. Any wilds on the screen grow to fill the entire reel and all wins are multiplied by two. This is called the Wild-Growth. The second thing that occurs is that the wand appears and touches random reels rendering them wild. This is called Metamorpha-Wild. Up to 15 wilds can be added randomly. But here’s the magic – all wins are multiplied by a random multiplier ranging from 2 to 10. This is known as Win-Multiplication. I was fortunate to get an 8x multiplier during the free spins round that garnered me a total of 8925 coins. I have never played any free spins round that was as exciting as this! It blew me away!

Another aspect of Witches and Wizards Slots that I’ve never seen before is the set-up of the AutoPlay feature. First, you have the option of selecting the total number of spins, followed by the total number of lines be played, and the total bet per line from a penny to $5. There is also a feature called Stop Conditions. Here, you can click on one of two buttons: the first is the Total Win button. You can set it from $10 to $1000. But there is also a Total Loss button that you can also set for the same amounts. Thus, if you are on a losing streak, the auto play will stop the game so that you can reassess where you are. Fabulous feature!

There are no other words to describe this awesome slot game. Suffice to say, you have to play it to appreciate not only its high value, but the realism with which the free spins round takes you totally by surprise. I highly recommend you play Witches and Wizards Slots at Bovada Casino , for it is a slot game unlike any other!

Where to Play Witches and Wizards Slots