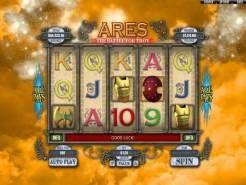 Play Now
June has shaped up to be quite some month for the online gaming development company Genesis.The Las Vegas-based company has released 3 brand new online games called, Taboo Spell, Gothic, and Path of the Wizard and as you can see by the titles they all have a fantasy and mystical theme about them.Genesis, well known for their creative games, with innovative themes are astounding graphics have done it again, times 3.

Taboo Spell is a visual treat with sublime images on the reels and the bespoke symbols are just fantastic.The main character, who sets the theme for this 25 payline, 5 reel slot, is the witch doctor and although witch doctors can cast those horrible bad luck spells, they can also cast quite the opposite, and this one cast a fair amount of good fortune when he appears.There are some great symbols such as the skull, crocodile, the tiki mask, and of course the witch doctor.There's a wild symbol, and the main feature is the randomly given free spins feature which rewards you with 6 free spins when triggered, and can also be re-triggered.Taboo Spell is a very good slot with a theme that is sure to make it popular. Gothic , although having a fantasy theme is totally different and as soon as the game loads you'll see the dark Gothic-styled castle with what appears to be the vampire waiting out front with a glass of wine!Gothic is definitely a slot for the darker minded individuals among us and its Victorian mystery theme combined with some spooky graphics will surely make it stand out. There are some great features too with the Goth Pick Bonus which a pick-em style bonus round that is played on a second screen, and plenty of freespin action too. Path of the Wizard is a magical mystical journey with stunning graphics and plenty of inviting features that help you on your quest to find riches.This fantasy world is created with runes, Wizards and Warlocks, and the magical elf.The Magic Journey free spins round is something to behold as you choose one of the scatter symbols to reveal the multiplier to help you your way.
Play Now