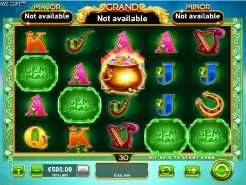 Play Now
Produced by Playtech this very Irish themed slots game introduces players with a little chat from the friendly leprechaun who guides the player through the game at every stage. There are five reels, and in the initial phase of the game, thirty paylines. During free spins, the number of reels and paylines increases. Three progressive jackpots are included in this slots game together with a special wild and nudge feature.

Direct access to Gem Splash: Rainbow Gift is possible through online and mobile options. Mobile players have instant access via the web browser of their mobile device, and in some casinos, there is an online casino app that can be downloaded and sits on the device's home screen. Online players are given direct access via the web browser of the casino. Betting options are enormous in this game, with players being able to bet up to $50 per payline, giving the player bets of up to $1500 per spin, and for players with lower budgets, the betting starts at $0.01. Symbols in the game are colorful and include the game's logo, harps, horseshoes, leprechauns, pipes, and pots of gold, and a gem drop symbol.

The gem splash symbol is the bright green wild, and this appears on each position on the reels where it will substitute for other symbols and complete winning payouts. The purple gem drop symbol randomly appears on any of the screen positions and will nudge down the positions giving the player a chance to complete a winning payout. Each spin the gem drop nudges more, and with it, a multiplier of up to 100x the bet placed is awarded. The gold pot filled with jewelry is the scatter, giving players up to 50x the coin bet placed and triggering eight free spins if three and more appear on the screen. Every two free spins, the game's grid expands from the standard 4x5 with thirty paylines to 5x5 with thirty-five paylines to 6x5 with forty paylines and the final expansion of 7x5 with fifty paylines. New symbols appear on the screen during the free spins, including a 2x2 mega-sized symbol giving players extra opportunities to win more payouts. The minor, major, and grand jackpots increase in value with every bet placed and can be won totally at random with a special jackpot game triggered and awarding one of the jackpots. The more the player places bets and the higher the bets' value, the greater his chance of winning one of the jackpots. Gem Splash: Rainbos Gift has a 96.4% payout offering plenty of opportunity and fun to every player.v
Play Now