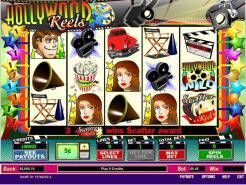 Play Now
This is a 5 reels, 9 pay line video slot with a Hollywood theme since it include symbols such as: the actor, the actress, the reels, the camera, the cars and the popcorn. Hollywood Reels offers a jackpot of 25000 coins. The player can bet for as low as 5 cent per spin to $45 for a single spin. Winning combinations are provided on the game itself on separate chart. In this slot the player can win extra money with by hitting other features such as the wild symbol, the scatter symbol and the bonus game. The Hollywood symbol is the wild symbol. It means that this symbol can substitute other symbols except the dream house and the scatter symbol. Scatter Reel: If the player hits three or more scatter symbols appear anywhere in the five reels, then it completes the winning combination and the bonus is credited accordingly. The Dream House symbol is the bonus symbol. If one dream house symbol appears anywhere in the fifth reel, then it activates the Dream House bonus game. Once activated the player has to select the correct combination for the security lock. Upon selecting correctly the player can win up to 2000 coins.

Where to Play Hollywood Reels Slots