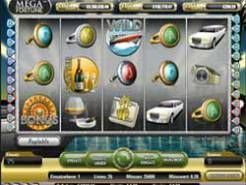 Play Now
It's no secret that some progressive online slots can pay out huge sums of money, however few people believe that it's possible to win €17,861,813 in one spin! Well, that's exactly what one 40 year old man from Helsinki did just last week. It's the single biggest jackpot ever paid on an online slot and was won on the popular Mega Fortune progressive that was developed by Net Entertainment. The game was being played at PAF Casino and the casino reported that the man was playing at 25 cent per spin. They contacted him the following day to conform the win and to get a few comments. He reportedly stated “It was completely unreal. I laughed and cried all at once. Can this really be happening? I wondered.” He continued saying that he felt like he was dreaming and he had to get his girlfriend to calm him down. Anders Sims the head of PR at PAF Casino said that all Net Entertainment Casinos had been holding their breath as the jackpot continued to grow, knowing that it simply had to pay out at some stage. he was obviously thrilled that a PAF player had won the jackpot and that the huge amount would be paid out tax free directly into the players PAF account. Wow, that's going to be one nice cash out! PAF Casino have also advised that the man get a little financial advice as handling that amount can be difficult and it's always best to do the right things with a win that big.

Until last week the Guinness Book of Records had the record at just over €11.7 million however this jackpot not only beat it, it absolutely smashed it. The previous win was also paid out on Mega Fortune. The slot is a 5 reel, 25 pay line slot and has a history of super big pay outs as since the last jackpot there have been €6.9 million, €3.9 million and €3.1 million jackpots paid. The jackpot is on a Wheel of Fortune style bonus game and is triggered by three game logos dropping in. Well, it's well done to the lucky winner and a big thumbs up to PAF Casino and Net Entertainment, may the wins keep coming.
Play Now