Rise of the Empress Slots 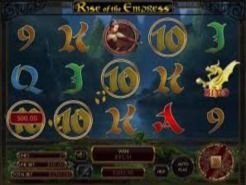 Play Now
Rise of the Empress is an Asian theme-based slot game. What is most unique about this game is that as the symbols do not move, the background does giving you a 360 degree view of the green covered mountains and its lake terrain. This is quite ingenious for a slot game.

Rise of the Empress is a 5x3 reel bonus video slot. The coin value ranges from one cent to 2 Euro. The max bet is 50 Euro. There are the buttons at the bottom of the slot game as well as the Auto Play and Spin. You can read the pay table by clicking on the question mark at the bottom of the slot. The pay table begins with the game rules followed by a myriad of special features in this game. So don’t miss out but read the entire pay table before playing the game.

Noted for displaying the RTP in their games, Rise of the Empress has a 94.766% RTP. Let’s begin with the two important symbols in this game, the Wild and Scatter symbols. The Wild symbol is a golden Dragon and will appear on reels 2, 3, 4, and 5. This symbol will assist you in scoring winning combinations. The Scatter symbol is two fish symbolic of Yin Yang. This symbol will appear on reels 1, 3, and 5 and wins will be multiplied by your total wager. The highest paying symbol is the Empress, who you will see in many photographs in this game. She will pay out 1250 coins when you get all five. All pays shown on the symbols and payouts page are paid with a bet of 25 coins. The card symbols are the lowest paying symbols.

Any 4 or 5 of a kind line win triggers the 5th Reel Re-Spin. When this feature is triggered, reels 1 -4 are held in place and reel 5 is re-spun. If the re-spin results in 5 of a kind win, no second feature is triggered. However, each 5th Reel Re-Spin increases your win multiplier by 2 to a max of 5. If the Re-Spin feature creates 4 of a kind win with the Scatter symbol in the 5th position, it will trigger one or more of the 3 secondary features.

This is quite a game; lucrative, unique; and filled with special features. But what we like the most is the way in which the background is shown – a virtual 360 degree view. We highly recommend you play Rise of the Empress at our recommended casinos.
Play Now

Rise of the Empress Slots News

Where to Play Rise of the Empress Slots

Rise of the Empress Slots Info