Batman and the Joker Jewels Slots 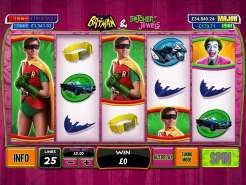 Play Now
Once again we are reviewing a slot game about Batman, except this time he is dealing with the Joker instead of Catwoman. The setup for this slot game is basically the same as Superman & Catwoman Cash Slots. This is a highly valued slot game presumably for high rollers. But anyone can play this game using the lower denominations. You will see Batman and the Joker as they were in the 1960 TV series. So get ready for this great reunion of your favorite DC Comic hero, powered by Playtech.

Batman & the Joker is a 5-reel, 25-payline progressive bonus video slot. The coin sizes range from 25 cents to 2500 dollars per spin. Note that originally the coins were in pounds, but hopefully they will be available in dollars so that online players from the US can play. There is the Auto Play and the Turbo Mode buttons. As we continue to say, we recommend you read the multi-page pay table so that you are aware of all the symbols, payouts, and special features in this game. Remember, there are four jackpots in this game: Grand, Major, Minor, and Mini.

As with Batman & Catwoman, Batman & the Joker do not pay out particular high payouts. It is any one of the four jackpots that you are vying for, however. The Batman Shield Logo is the wild symbol as well as the Batman symbol. Both of these symbols substitute for all other symbols to form winning combinations. They do not substitute for the scatter symbol. Other symbols include: Batman, the Joker, Robin, plus an assortment of 6 symbols related to this theme. There is also a Bonus symbol that appears on reels 1, 3, and 5 that will trigger the Batman vs. The Joker Free Spins Round.

All wins in this round are multiplied by the Bat-tastic multiplier meter. You can choose the Caped Crusader or the Clown Prince of Crime to add a 5xs multiplier to their side of the meter. The Wild symbol moves the multiplier meter to the left or right. Free spins are unlimited until the meter lands on end.

These wilds will randomly occur during the main game. He can add up to 9 wilds in any position on any spin. His symbol substitutes for all symbols except the scatter symbol.

This is another enjoyable game from Playtech, and the special features will add up to winning payouts. Also, don’t forget that you have a chance to win one of the four jackpots. Play Batman & The Joker Jewels slots at our recommended casinos.
Play Now

Where to Play Batman and the Joker Jewels Slots