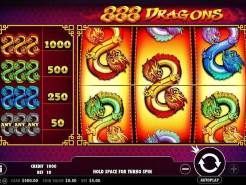 Play Now
It was just announced that a new software brand has created a new online slot. The title is 3888 Ways of the Dragon. This Asian theme-based slot will turn out to be a doozy for players who like surprises. The slot has 5 reels and special features including unique symbols, bonus symbol and a wild symbol. The Bonus symbol is a Double Dragon with one head red and the other green. Now that’s a twist! When you get three or four Bonus symbols, you will earn bonus spins. The Gold Dragon Wild symbol will also prove to be quite important in this game. But the big payout will be when you are playing in regular mode, the Dragon Spin feature will be activated at random. He will swoop across the screen and give you addition wilds.

As a result of the release of 3888 Ways of the Dragon Slots, iSoftBet announced that it has received a license to operate in the newly regulated iGaming market. iSoftBet is certainly moving on up. It’s been reported that iSoftBet already licensed by regulators in multiple jurisdictions including Italy, Spain, Romania, Portugal, Denmark and the United Kingdom, have now joined the ranks of the top rivals in obtaining a Swedish license.

Wait until you read about another new slot game called Raging Rex Slots. The number of ways you can win is 4,096. We have a competition going on here. This is a prehistoric dinosaur theme based slot that is now available at our participating casinos. While spinning the reels, players can access Rampage, which earns players free re-spins. If the Raging Rex is seen fully stacked and visible, he will walk from left to the first reel and will take one step with every re-spin. The re-spins will end when the dinosaur reaches the first reel. Raging Spins can also be activated when scatter symbols appear on the reels. The scatter symbol is a flaming meteor, a rock that can award 8, 15, 20 or 30 bonus spins depending on how many symbols are on the reels. During the Raging Spins mode, even more bonus spins are earned if additional scatters appear on the reels. When this mode is activated, the player will win a payout of 5xs his trigger bet.

The slot game is Turn Your Fortune, and you certainly will be able to when you play this already popular new slot game. The scene takes you 19th century France with art being the theme. There are many ways to win playing this game. Players tell us that if you land the lucky key symbol, you'll have the chance to unlock the vault. As you collect more and more symbols, the multiplier on the vault will increase, giving you more chances to win! Land the key during the Fortune Re-Spins or Free Spins game and you'll automatically unlock all of the levels. Up to 2000xs your bet could be yours for the taking. Other features include free spins and fortune re-spins.

A news report released today indicates that a government minister wants to consider banning credit cards used for online gambling. He is the Secretary of State for Digital, Culture, Media, and Sports. He will be holding meetings with banks and bookmakers to discuss this matter after having learned that “20% of wagers placed with some sportsbetting operators involve the use of credit cards.”

Have They Gone Bloody Mad?

We expect to see the Gambling Commission regulator investigate the matter next month before any announcement is made on the use of credit cards, which in his words could “lead to the nation’s gambling industry losing billions of dollars in revenues every year.” Whatever you say, Minister.
Play Now