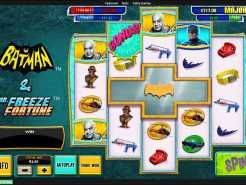 Play Now
Once again, we return to more Batman Slot games from Playtech as part of the DC Comic series of super hero games. In this review, Batman goes up against Mr. Freeze. This slot is taken from the 1960 TV series, and it is as enjoyable to play as all the Batman slots are. The introduction to this game tells us that there will be Cool Polar Prizes! Win one of 4 in-reel features on any spin with 1,024 ways to win. Now that IS cool! Moreover, we have a slot machine that is octagonal. More surprises from Playtech!

Here again we have a slot game that us unique in its design. A 1,024 way progressive slot game that is lucrative and so much fun to play. What makes these Batman games so special is that no two are alike. The coin sizes in this game range from 2 cents on. But what is most interesting is that in the middle of the slot is the Golden Bat icon in an octagonal, if you will, box while all around it the reels spin. As with all Batman DC Comic Slots, there are four jackpots: Grand, Major, Minor, and Mini. The Grand is worth $200,000. There are 1024 ways to win on the reels in the main game. There are 2400 ways to win on the reels in Batman vs. Mr. Freeze Free Games. The number of Ways to Win is fixed for the main game, re-spins and Batman vs. Mr. Freeze Free Games. Your total bet per game round is the coin value × 50.

The symbols in Batman & Mr. Freeze Fortune Slots contain the following: Batman, Mr. Freeze, Robin, a helicopter, the Batmobile, a ray gun, a red telephone, a bust, a gold belt, and the flying bat. The Bat is the wild symbol and will substitute for any other symbol except the bonus symbols to form winning combinations. Batman, Mr. Freeze, and Robin symbols can appear as single symbols and as 2-, 3- or 4-high stacked symbols. Each reel is 4 symbols high. Reels #2, #3 and #4 are split in the middle for the Polar Prize Vault.

When you get three or more Bonus symbols, you will trigger the Batman vs. Mr. Freeze Free Spins round. Here you can win up to 15 free spins. You will be able to face off against Mr. Freeze for wild multipliers and 2400 ways to win. The Polar Vault is replaced by extra symbols. All wild wins are multiplier by up to 5xs.

At the end of any main game spin the Polar Prize Vault can open to reveal 1 of 4 Polar Prize. These consist of the following:

This is yet another lucrative game by Playtech and DC Comics. It is different, enjoyable, and offers quite a variety of special features that are miles apart from the other Batman Slots bonus features. We invite you to play Batman & Mr. Freeze Fortune Slots at our recommended casinos .
Play Now

Where to Play Batman and Mr Freeze Fortune Slots